Not Quite a Wife 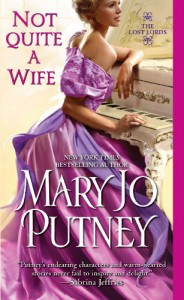 If only she can only get past the fact that her husband is...da da dum...a murderer who did the dastardly deed on their honeymoon. She's advised to become more physically intimate with him to help her get around this "problem" and help her reconcile their marriage. What a gigantic bowl of crazysauce!!

Let's forget about the fact that in reality her husband works for the government as a "spy" of sorts so it wasn't really murder and during the course of the story her husband kills a second man in front of her. She ends up accidentally killing a man who kidnaps her and her maid, so this romance had lots and lots of death.

I would only recommend this if you are OCD and absolutely must read every book in an entire series. Looks like the next one is about the brother of Mrs Crazysauce so who knows. It already appears to be as pushing the boundaries of "woo-hoo-goody-two-shoes" as this one did. He's going to fall in love with the abused wife of someone he shouldn't be messing with and can't have. Waahh!!!!
Tweet
7049 BOOKS
Facebook Twitter Goodreads